Advisory Boards versus Boards of Directors | Which is Right for You?

Most CEOs of early-stage ventures face the challenge of finding the trusted guidance and advice to help them run their companies.  In larger, later-stage companies, CEOs usually would look to populate their board of directors with outsiders who can play this role.  However, in emerging companies, the question of who fills board seats is most often legislated by investors, who usually occupy these seats as well.   If CEOs can secure a single outside seat, they are considered to have done well; more than one, and they’re in the vast minority.

Unjust and unfair you say?  Should an early-stage board of directors not be comprised of investors?  Having invested significant financial capital, investors are now partners in the venture and, as such, need legal standing and a vehicle through which to monitor and nurture their investment.  In addition, they have limited partners who have invested in their VC funds.  These investors might consider the VC negligent if the VC abdicates the opportunity to sit on the board and be responsible for if and when to exercise legal triggers built into investment documents that safeguard their investments.

Having an investor-dominated board, however, can work against the CEO in several ways:

So if the board of directors early on is often (for good reason) locked up with investors, and these directors frequently aren’t providing the “best and highest use” in their board seats, what are the alternatives for the guidance, mentorship, and strategic input and connections needed to optimize the probability of a CEO and their emerging company’s success? Often a “shadow board” is the solution, otherwise known as Strategic Advisory Board. The potential benefits for the CEO of a Strategic Advisory Board (SAB) include the following:

Note that ultimately, the SAB and the BoD are likely to converge as the company moves into a later growth stage.

For a closer look at the differences and benefits of each, here is a comparison of the characteristics of the traditional board of directors versus the strategic advisory board: 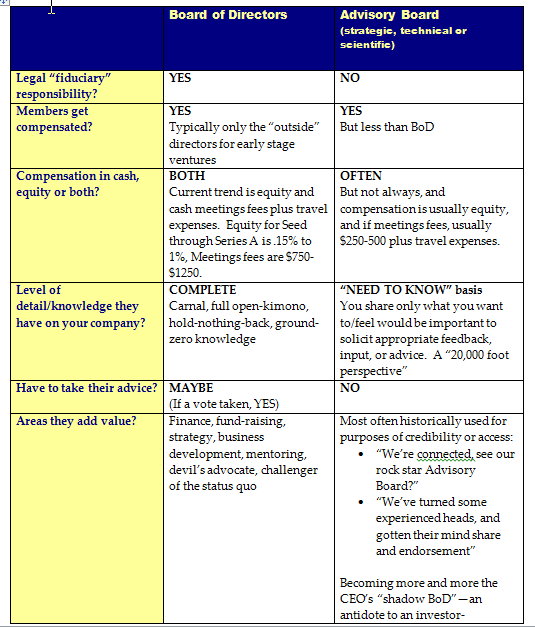