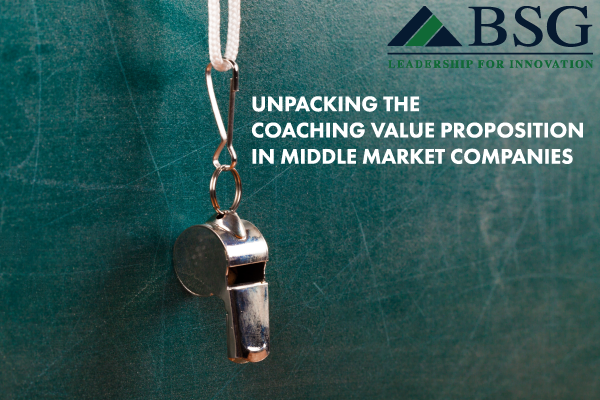 There’s been a lot written and discussed around coaching of the sports variety.  Talk radio, TV, newspaper columns, even dedicated cable TV channels.  However, there’s been a lot less written about other types of coaching.  There was quite the zeitgeist in “personal coaching” in the 90’s and the early years of the new millennium that resulted in some media attention across the “self-help” spectrum.  This personal coaching was most often focused on improving “you” and helping one to seek out and find their individual manifest destiny.  But a third type of coaching, neither sports nor personal--coaching in the business context—has gotten far less fanfare.  And in the instances when it receives mention at all, this type of coaching has, for whatever reason, evolved with a notable stigma.

Unlike sports or personal coaching, which is often seen as a positive addition to development, executive or team coaching in businesses is intrinsically understood as a “remedial” function of coaching.  It often seems to be associated with a sentiment that “well, maybe if we try some coaching, we can fix the problem.”  This framework presupposes that there is a said “problem.”

Through BSG’s experience, our perspective is that we find this entirely shortsighted.  Why should the default setting in the corporate context be “coaching is only for the damaged or broken”? Why shouldn’t it be along the lines of, “Hey, let’s imitate what seems to work in the high performance world of sports, and assign coaches instead to those who demonstrate the highest ability, talent, and skills, and—in doing so—perhaps we can help them improve even further.” This is akin to the Marcus Buckingham mantra, “focus on improving your strengths,” vs. remediating your weaknesses (https://www.marcusbuckingham.com/rwtb/business-case-for-strengths/).

The typical NFL football team averages 15 coaches. And that’s for a team on the field for any given play of only 11.   A pro tennis player has a lead coach, a strength coach, a sports psychology coach, and often several other specialist coaches. That’s a ratio of 3 or 4 coaches to 1 athlete.    An Olympic athlete has an arsenal of coaches on which they can draw.   Let’s breed more “Olympic corporate athletes & teams.”  One has to wonder what might happen to business growth & productivity if we did.  Eric Schmidt, the vaunted former Google CEO and now Chair, confessed the value of coaching for him and his Google mandate with great candor in this video interview: https://www.youtube.com/watch?v=yVfeezxmYcA.

So here’s our take on coaching in the corporate context.  We can only encourage BSG’s clients, and all others who are looking for the very highest performance from their individual business athletes, as well as the teams on which they play in the quest for making good on OKRs and associated KPIs (https://www.whatmatters.com/,  https://www.investopedia.com/terms/k/kpi.asp)