CEO compensation Analysis, West vs. East, and Founder vs. Non-founder 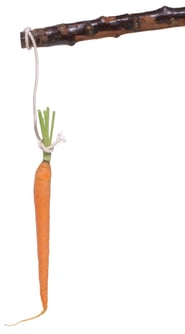 We are often asked to do some executive compensation "ciphering" on behalf of our clients.  Getting an accurate read on market compensation is always a bit of fuzzy math.  You can call around to those you think may know or are in those positions now, you can commission a survey, or dig into some of the executive compensation databases that pre-exist.  We often do all three on behalf of our clients.  However, the below numbers are based on the Dow Jones executive compensation data collected several times a year, targeting venture-capital backed companies in the U.S.  The companies surveyed cover early stage seed-round and Series A, through later funding stages, and companies that are pre-revenue through shipping product and profitable.  From an industry perspective, the below data is an amalgam of all venture-backed industry sectors in the U.S., including technology (software, hardware, services, interactive media, etc.), sciences (biotech specifically), medical devices, cleantech / renewable energy, and other related fundable venture sectors.

1)     West Coast versus East Coast, and the differences that may exist between them

This is always an interesting analysis.  Each category of CEO always feels as if the other is getting a "better deal"-CEOs on one coast think it's likely better on the other, and founders and non-founders often feel the other has a better package.  Similarly, early-stage CEOs are often jealous of the "rich cash packages" that they seem to hear about in later stage companies, and late-stage CEOs always feel that early-stage CEOs get so much more meaningful an equity position than they as "hired guns" seem to be able to garner.

Note that below we've only included the analysis of the executive compensation data, in other words the deltas.  If you'd like more detail and the information on which we based the analysis, please email damador@bsgtv.com with your name, title, company and business email address, and we can provide you with the baseline full report.

Do keep in mind that this is only one set of data.  To draw the best comparables, it's important to do all three data-grabs listed above.  Also, this is a "blended" sample set of all venture-backed industry sectors.  Some industry sub-segments may pay more or less than others with further parsing.

Highlights of the Analysis

In the first "delta" table, we took a look at West versus East for early stage start-up/product development focused companies.   What was apparent in this earlier stage company setting was most recently, West Coast early-stage CEOs  on the whole have lower cash packages in both base and bonus. In addition, an equity analysis also returns 1-2% less on the West Coast than East in this data set in the lower quartile and median.  However, in the top quartile compensation range (those CEOs who have compensation in the top 25% of all CEOs surveyed), West Coast CEOs outearned East Coast in both cash (by only $13,000) and equity (a full 1% more).  Another interesting data point is that West Coast CEO's have more upside in terms of bonuses (an average of 27% of their base compensation) than East Coast CEO's whose bonuses are an average of 16% of their base compensation. 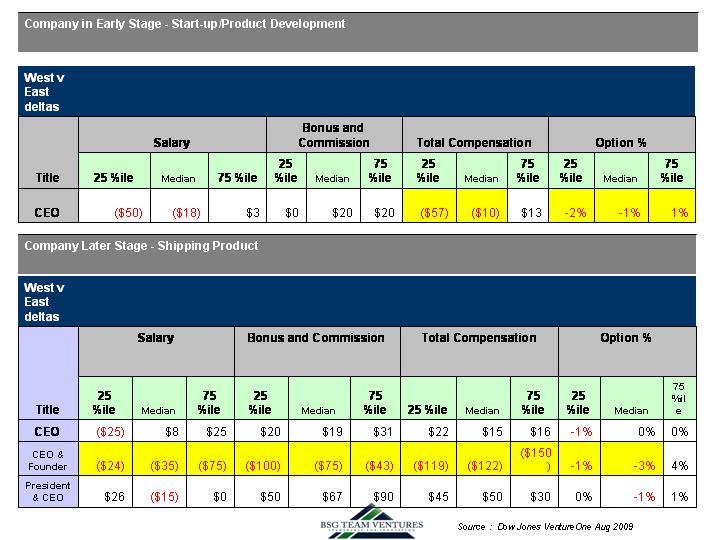 West Coast non-founder CEOs (hired guns) make more than East Coast in cash only.  Equity is about the same, East vs. West.

On the West Coast, the pattern that Noam Wasserman at HBS has observed does prove out--  that non-founder CEOs get paid less cash compensation, but hold much more equity than their non-founder CEO counterparts (see here). 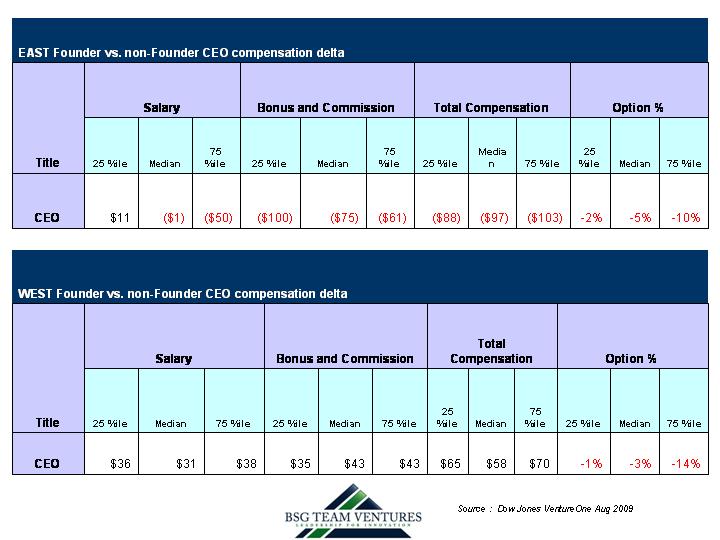