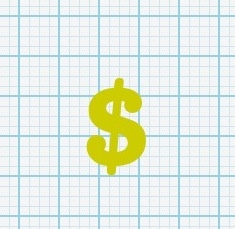 The subject of compensation sparks passionate conversation in the corporate world, especially among executives. One of the challenges of working for (and working with!-- as we do) privately held companies is that data on compensation is not readily available. Surveys on the matter are performed from time to time, but as a whole, reliable information remains a "gray market."

This post will be a rare look at hard data. Thanks and attribution go to Charles Rutstein, former Chief Operating Officer of Forrester Research. He recently joined several boards, and he has taken it upon himself to collect information to help him triangulate on market best practices. He was kind enough to share the results with us. (For more by Rutstein, check out his brand new blog.)

Rutstein compiled 40 data points, including some recent (2011) benchmark data, from well-respected and experienced VCs, PE investors, startup CFOs, and so on. A trend emerges from the data, but Rutstein notes many participants emphasized the specificity of individual situations. For example, outside directors brought in to offer specific expertise (access to their network, advice on operations, help in selling the company, etc.) often received one-off compensation packages which fell outside these ranges.

Again, graphs and specific numbers are many thanks to Charles Rutstein. 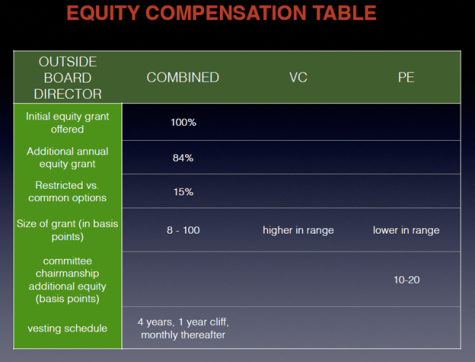 Not surprisingly, equity comp is the most prevalent (cited in 100% of individual responses and 93% of benchmark data). All those who used equity comp for outside directors employed upfront grants, while a substantial majority (84% in benchmark data) also offered some form of ongoing, annual grant.

Equity vehicles were heavily weighted towards options, with only about 15% offering restricted shares. Some experienced directors in the sample said they are trying to change this mix more towards restricted shares.

Size of initial grants ranged from 8 to 100 basis points of fully diluted company ownership. Three factors appear to govern where in this range the grant is likely to fall: size/stage of company, day-to-day involvement in the company, and committee assignments.

Across the board, the earlier stage the company, the greater the size of the grant. Median responses seem to cluster around 50 basis points, but that may be related to the nature of the sample.

Outside directors who commit to spending specific time with the company (e.g. a day a week) tended to fall on the higher end of the range as well.

Committee chairmanships among outside directors in the sample were few, but generally seem to merit an increase of 10-20 basis points.

Vesting schedules were weighted towards four-year vesting, with most vesting on a monthly basis (note that a substantial minority had a cliff vest at year one, with monthly vesting thereafter).

Vesting triggers were also relatively common – including full vesting upon change of control in nearly all cases. Experienced directors also noted that they seek – and often get – relatively long post-service exercise terms of a year or more. 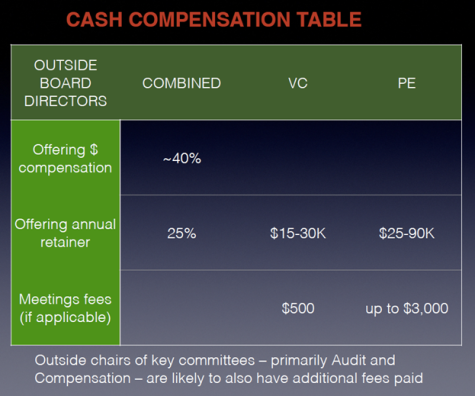 Meeting fees (when employed) ranged from $500 to about $3k for in person meetings, and about half that for telephonic meetings. Nearly all reimbursed direct meeting travel expenses for non-local board members.

There was no clear pattern around other compensation categories. Some firms offered health insurance to directors, for example, while others offered more humdrum compensation like meals at board meetings.

Experienced directors and attorneys in the sample noted that outside directors certainly require firms to provide high-quality D&O insurance. In addition, some suggested the importance of specific indemnification arrangements for directors, separate and apart from those arising under corporate bylaws.