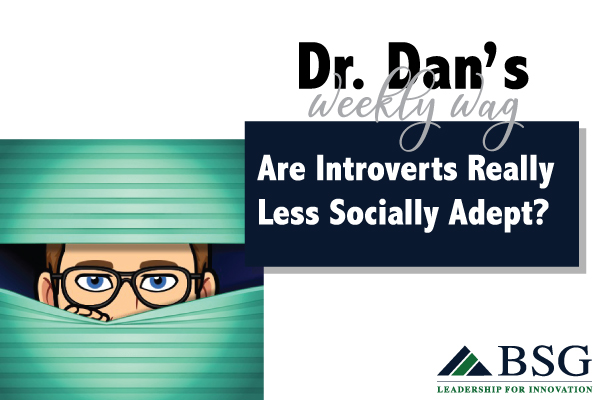 As with many perpetuated myths of the mind, we have Freud to thank for the origins of this unfortunate debate.  You see, Freud not only coined the term “introvert”, but also inspired generations of misguided angst because he defined introverts as, “emotionally stunted narcissists.”  Complex, anyone?

With all due respect to the OG shrink-meister himself (the lens of history is not always kind to pioneers, you know), his greatest contribution to introversion is probably limited to the term itself.  Unfortunately, over the many decades that have followed its introduction—which includes considerable scientific study and clarification—introversion continues to languish in the shadows of its original Freudian mythology.

To fully appreciate the depth of this curse (which dwarfs that of both the Bambino and Billy Goat combined), one must understand the power of the protagonist sibling occupying the other end of the introversion continuum—extraversion.  Unlike its supposed lesser half, extraversion has long been revered as the holy grail of interpersonal je ne sais quoi—friendliness, gregariousness, assertiveness, cheerfulness, and virility to name a few.  In other words, “Marcia, Marcia, Marcia!”

Is it hopeless for introverts then?  Not so fast.

Generally speaking, sociability is NOT the most defining difference between introverts and extraverts; it’s the capacity and associated desire for stimulation (i.e., energy in any form—physical, mental, emotional, social) that is, and introverts typically have less capacity for stimulation (on average) than extraverts.  It’s as if they have smaller “parking lots” that simply fill up faster.  Once full, the only way to free up capacity to accommodate additional stimulation is to temporarily reduce exposure and open the exits.

Extraverts, on the other hand, have larger stimulation parking lots—and in cases of extreme extraverts, much larger—think Disney World (A.K.A. Introvert Hell).  When an extravert is running low on energy, they open all the entry points to positive sources of stimulation.  And, for some, the parking lot rarely, if ever, fills.  They simply thrive on stimulation.

Now, I know what you’re thinking—isn’t a lower capacity for stimulation just another way of saying that introverts are, in fact, less socially inclined then?  Not exactly.  Introverts (as a group) are no less socially skilled or oriented than extraverts—they just tend to be more selective about how many cars they allow into the lot at any given time.  So much so, in fact, that they constantly balance between letting some cars in and pushing others out, which applies to all forms of stimulation, social or otherwise.

Another way to think about this as it applies specifically to social interaction is in terms of quantity (how often, how much) and quality (the ability to interact and connect with others effectively).  While the former may be a bit more constrained for introverts at times because they have less capacity, there is typically no difference in terms of the latter.  In other words, when it comes to social quality and skill, introverts are no less socially adept than extraverts.

Still not a believer?  Google “Johnny Carson Introvert,” and read away!

PS—Keep in mind that all of the major personality characteristics (i.e., 5 Factors) are “normally” distributed in the population (think bell curve).  What this means is that the majority of the population (about 65%) is actually pretty close to the middle.  The middle range on the introversion-extraversion continuum is often referred to as “Ambiversion,” which is comprised of people who demonstrate mild, somewhat flexible characteristics of both introversion and extraversion depending on circumstances.  Therefore, only 35% of the population is considered more definitively either introverted (17.5%) or extraverted (17.5%) to begin with.